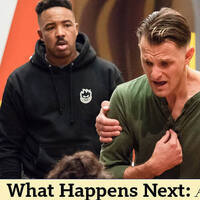 What Happens Next: A Cornerstone Theater Company Play Written in Collaboration with the Veteran Community

In What Happens Next, Bonnie, an idealistic but inexperienced acting teacher, finds herself paired with a group of veterans as part of a drama therapy program. As she is confronted with the reality of her reluctant new students, Bonnie struggles to find a way to build trust and find common ground.

Written by award-winning playwright Naomi Iizuka and directed by Cornerstone’s Artistic Director Michael John Garcés, What happens Next was first performed in association with La Jolla Playhouse as part of their Beyond the Walls series at the Challenged Athlete’s Foundation in San Diego, for an audience of veterans, their families and the general public, and benefiting Operation Rebound.