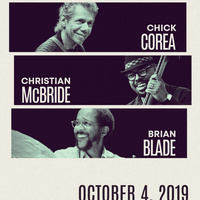 Chick Corea has attained iconic status in music. The keyboardist, composer and bandleader is the fourth most-nominated artist in Grammy Awards history with 63 nods—and 22 wins. Whether playing acoustic piano or electric keyboards, leading multiple bands, performing solo or collaborating with a who’s who of music, Chick has touched an astonishing number of musical bases in his career since playing with the genre-shattering bands of Miles Davis in the late ’60s and early ’70s. Yet Chick has never been more productive than in the 21st century, remaining a tireless creative spirit, continually reinventing himself through his art.