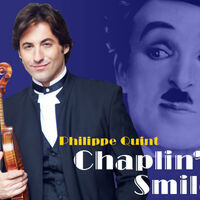 An unmistakable and endearing character in his bowler hat and mustache, Charlie Chaplin composed almost all of the music in his films. This unique program juxtaposes Chaplin’s love songs with those great composers who influenced him, including Debussy, Stravinsky, Brahms and Gershwin. Screen clips of Chaplin’s silent era films (and rare video footage of Chaplin conducting his orchestras in recording sessions) are accompanied by multi Grammy Award-nominated violinist Philippe Quint.